In 1871 Joseph Baxendell Snr., the ‘Timekeeping Astronomer and Meteorologist for 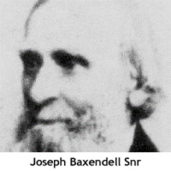 Baxendell’s mother Mary, née Shepley, had a lifelong interest in observing the night sky, which encouraged Baxendell’s interest in astronomy. Whilst carrying out his role as Superintendent he continued pursuing this interest, particularly the study of variable stars. Prior to arriving in Southport Baxendell’s observing logs showed he had been studying variable stars since 1836, and by 1849 had made his first contribution to the Royal Astronomical Society, followed by enrolment as a Fellow in 1858. His competent astronomical studies ensured he became highly regarded at private UK observatories, giving him the opportunity to communicate with many well known 19th century astronomers. In 1865 he married Mary Anne Pogson, sister of the astronomer Norman Pogson who developed the modern scale for determining stellar magnitude (brightness), and like Baxendell he was also interested in studying variable stars. Baxendell also had an interest in studying solar phenomena such as sunspot numbers and was attempting to establish if there was any significant impact on the earth’s magnetic field or atmosphere. In 1884 as a renowned meteorologist he was elected a Fellow of the Royal Society without seeking that honour. Interestingly James Joule was one of his sponsors, and the SI unit of energy was named ‘Joule’ in recognition of his major contributions to science.

In 1877 the polymath Thomas S. Bazley shared Baxendell’s lifelong passion for astronomy donated and delivered to Baxendell’s home at 14 Liverpool Road, Birkdale, a Thomas Cooke & Sons 6 inch telescope. Also included was a Troughton & Simms transit telescope for the precise observation of star positions, and star transits for setting extremely accurate clocks used to set marine chronometers, plus the timber observatory structure for housing them. Upon installation in his garden Baxendell renamed his house “The Observatory”, and with the help of his son Joseph, continued studying variable stars using the Cooke telescope, whilst also carrying out his meteorological duties. Being a devout Methodist, Baxendell had the first line from Psalms, chapter 19 (XIX-I, K.J.V) painted around the base of the dome, which enhances its authentic Victorian character for today’s visitors:-

“THE HEAVENS DECLARE THE GLORY OF GOD, AND THE FIRMAMENT SHEWETH HIS HANDIWORK”

From 1836 until his death in 1887, he discovered 18 new variable stars and monitored 23 long-period variable stars. The details of his work were published in 1912. Baxendell was succeeded as meteorological superintendent by his 18-year old son Joseph Baxendell Jr., whose main interest was meteorology rather than astronomy, consequently, little use was made of the observatory.

Department of the then Southport Corporation. They were installed in their current position in Hesketh Park atop a specially-built brick structure at a cost of £100, with funding from the winding-up of the estate of the late John Fernley (photo).

Use was soon made of the observatory for private viewing by members of the Southport Scientific Society with an interest in astronomy, who eventually formed an astronomical group in 1927 that became the forerunner of the Southport Astronomical Society. The gentleman holding the telescope is thought to be Joseph Baxendell Jnr.

The telescope you see today was manufactured in 1869 to the specifications of the brilliant self-taught optical engineer Thomas Cooke, founder of the famous optical firm Thomas Cooke & Sons of York & London.

It’s rare to find a working 19th century Cooke telescope installed in a Grade II listed observatory within a Grade II listed Park that opened in May 1868. This exceptional combination enables today’s park visitors to appreciate the heritage value of mid-Victorian engineering and optical skills, and also enjoy the wonders of the night sky in a classic Victorian park. This telescope was 100 years old when humans first landed on the Moon, and today with modern eyepieces its observing performance is better than when originally built. 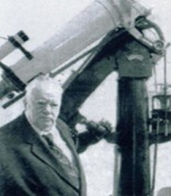 The well-known amateur astronomer, the late Sir Patrick Moore even visited the observatory in May 2002. Southport AS is thus privileged to be able to use this unique educational resource to help people learn about modern astronomy and its related sciences.  Observatory visitors can acquire copies of (currently) eight astronomy information leaflets that are listed on our Introduction to Astronomy webpage.

During 2020 observatory public open days will be on the last Sunday in the month; dates and times below:-

Additional dates will be included for Bank Holidays and any Park Events, but please be aware that occasionally changes may be necessary due to weather, illness, park management requirements, etc. Should changes be made, a notification will be displayed on this page

For further information please contact our Observatory Manager  at robert.mount@talktalk.net

For additional historic information visit FOHG’s Observatory timeline, and remember to collect a copy of our information leaflet ‘The History of the Hesketh Park Observatory’ when visiting on open days.